As a single parent, there is nothing I hate more than someone saying,

“Is his father around?  Did you know he was an asshole before you got pregnant?”

Now, let me say that I completely understand why someone would ask that but know this:  Our relationship, good or bad, before having our son does not absolve him from being a good father.  Nor does that make me responsible for him being a bad father.

I raise my son alone.  I have a great support system in my family and my son’s paternal family.  I clothe him, feed him, care for him, protect him and love him AS I SHOULD.  I am taking responsibility for my actions and choices. I’m doing what I am supposed to be doing as a mother.  Being irresponsible led to my being a mother.  It also led to me making the responsible choice of taking care of my son.

That there is where the responsibility rope ends for me.  I AM NOT responsible for his father not being present.  I am not responsible for his father choosing to not be a parent.  When a person tells a woman, “well, you should have known….” you are taking the responsibility away from the man and placing it on the woman.  You are telling her, “it is your fault that your child’s father is not around.”  I now know that not to be true.

For a long time I beat myself up thinking that it was my fault that my son is growing up without his father. It took me a while to realize that I was blaming myself for something of which I have absolutely no control.  Once my son was born all of the shoulda, coulda, woulda’s became irrelevant.  I couldn’t go back and change anything.   All I could do was be the best mother possible.  And that’s what I’m doing.

Destyne is a single mother and educator. Through personal experiences and life lessons she hopes to bring a different perspective to everyday issues in a simple, straightforward, yet positive way.  With her free spirit and ever evolving thought process she takes on the challenge of bringing people together.  Not to make them think the same but to be able to exist as different and unique individuals. Visit her blog Destynefulfilled.wordpress.com.

Severing the Ties to Your Failing, or Unhappy Relationship
By: JoAnne Williams

If you all of a sudden woke up one day and discovered that you have been in a failing or unhappy relationship for an extended period of time, you should begin to prepare yourself for exiting that relationship. Sometimes we allow that deep emotion of LOVE that we feel; to keep us clinging onto and remaining in, bad relationships. One should never love too deeply to the point where you accept bad behavior from your significant other for an indefinite period of time. A lot of times, we don’t equip ourselves with the necessary tools that will assist us when have decided to exit out of a failing/unhappy relationship. Know that the emotion of love does not mean that you should allow yourself to be held captive in a relationship that you are so desperately trying to escape from. Know that you can still be in love with your significant other even if you have made the decision to exit out of the relationship.

Also know that being alone and uncommitted, is not the worst possible place you can be. Know that there is somebody else out there who will love you and respect you for who you are. Know that you DO have the capability of surviving in the world without being attached to someone who brings you constant emotional turmoil. Learn how to master the skills of being able to close the door on a failing or unhappy relationship without looking back. Learn how to say NO to that revolving door of misery. If you are in a failing or unhappy relationship; and you a looking for an exit out of that failing/unhappy relationship, just convince yourself with every fiber of you being that this is not where you should be. And then start executing the actions towards your ESCAPE!

The Power of Black Love

There is nothing more beautiful than the love between a Black man and a Black woman.  The security and love that a Black man gives the Black woman is breathtaking.

We are living in a society that focuses on the breakdown or dismantling of the Black Family structure instead of focusing on the positive aspects.  Black love does exist and will live forever despite the depiction of what society says about Black love.

Black love exemplifies strength, forgiveness, communication, growing together, trust, reciprocity, unconditional love, and loving each other until your very last breath.  There are couples that are the epitome of Black love such as Bill and Camille Cosby, Will and Jada Smith, Ossie Davis and Ruby Dee, President Barack and Michelle Obama, and the list goes on.  There is a certain chemistry that Black love emits and others can see and feel it too.

It is important for our children to see the power of Black love so they can have a healthy knowledge of what true love represents.  With 60% of Black households being led by Black women, many children are not able to see healthy relationships between a man and a woman.  Healthy relationships are comprised of trust, honesty and respect.

Some Black men are reaching out and marrying women of other ethnicities for various reasons.  This action decreases the chance of the Black woman to love and marry a Black man.  It also poses the question is our race giving up on Black love?  Is there a feeling that love and happiness is found elsewhere as in other races?

We are a beautiful race with a history that should have cemented our people to learn how to stand together, support, and love our own.  The power of Black love is amazing and I do believe it will stand the test of time.

Dr. Shanessa Fenner is an educator, writer, radio personality, and has her own TV show.  She is a multifaceted Black woman who is motivated and cares about her people.  Her passion is motivating our future youth to be all they can be.

Why Marriage Is Important to the African American Community

As the statistic that 70% of black women are single prompted me to write this book, I’ve made amazing discoveries, I wasn’t aware of before…I feel the universe is in perfect balance, and what comes around goes around. When you look at the fact we have a President with African blood-lines (and I say this because I believe we are Africans living in America, as that’s where our roots lie, despite the fact, the majority of us cannot trace our roots, and the fact Obama is biracial), when you look at that fact, and remember our history in America, that started in slavery, is it any wonder that one day we would have a black man running this country? When you remember history, and how America first belonged to the Indians or Native Americans, and realize that Mexicans have descended from the Aztec Indians, is it any wonder that Mexican Americans far out populate any other ethnicity in America today? That said, when you take into account Mexican culture and how significant and important family is to their culture, we can learn something from them…

Given the following statistics, family, which is produced in its most healthiest forms, through marriage, makes marriage an important factor, especially to our community:

“The marriage rate for African Americans has been dropping since the 1960s, and today, we have the lowest marriage rate of any racial group in the United States.”

“Today the number of children born into a black marriage averages less than 0.9 children per marriage. ‘The birthrates of black married women have fallen so sharply that absent out-of-wedlock child-bearing, the African American population would not only fail to reproduce itself, but would rapidly die off.”

“African American women are the least likely in our society to marry. In the period between 1970 and 2001, the overall marriage rate in the U.S. declined by 17%; but for blacks, it fell 34%.”

“Divorce and marriage play a much bigger economic role for black children than white children in the U.S. In the first 2 years following a divorce, family income among white children falls about 30%, while it falls by 53% among black children. The difference increases dramatically in the long run. 3 or more years after the divorce, about a 3rd of the loss in whites’ household income is recouped, but the income of black families barely improves…” -UC Davis economists, Marianne Page & Ann Huff Stevens

Commentary welcome, and thanks for listening… I hope this sheds light on my marriage reformist notions for our community…

If you want to know more, check out her book Food For The Soul 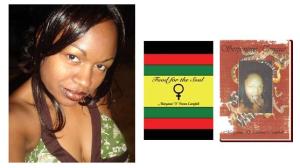 Maryanne D. Brown Campbell is best known for her “in your face,” uncensored poetic style, thus the name Serpentine Tongue, the title of her previous book, is befitting of her works, as she has a tongue like a snake, with her witty, sharp and critical edge, and honest and ever passionate views.  She is also versatile to the likes of one of her favorite poets Paul Laurence Dunbar, who wrote in eloquent English vernacular and slave dialect.  Inspired as well by everyone from the late Tupac Shakur to her former college instructor, author, poet, playwright, dancer, actress and lecturer, Ntozake Shange, as well as poets Amari Baraka, Saul Williams and Black Ice, she plans to make a name for herself, with more works to come.

Food for the Soul touches on the topics of sisterhood, sexuality, interracial relationships, the word “bitch”, emotional intelligence, what it is to be a “Pillar of Strength” and a “Beast of Burden”, beauty and so much more.  Its essence is as the title suggests, a component to feeds one’s soul literally, -a book no African-American household should be without, as it gives us a deeper and profound understanding of our state of being in the African American community today, in order to remedy our issues amongst ourselves and with one another.